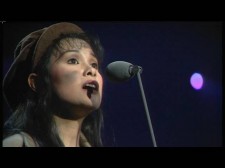 Columbia County, GA, April 4, 2017 (Newswire.com) - Jin Xiuying is an aspiring songwriter who is starting to make her mark on the world. Originally from Shanghai, China, she came to this country as a young child, settling in Columbia County, GA with her parents. In her songs, she is clearly influence by modern pop culture, but she adds little elements from China in everything that she writes, staying true to her original roots.

Jin Xiuying herself says: "I have few childhood memories of Shanghai, but whenever I visit, I still instinctively feel at home. There is something about the peculiar sounds of the city, not just the traffic, but also the sounds of everyday life. Life on the markets, in the backstreets, and in people's homes. This is what I incorporate in my music."

"The story is one of a woman who wants to break away from family traditions, aiming to marry for love instead. Her family finds this difficult to accept, resulting in various suicides. Of course, like in any good Chinese story, the spirits of those who commit suicide return and lament their tormentors, eventually finding solace with the ones they truly love."

One of Jin Xiuying's greatest inspirations is the opera singer from Shanghai with whom she shares a name. She sang in Huju, which is traditional Chinese opera, and took on the lead female role. The opera in which she performed, 'Rendezvous at the Nunnery', became popular in 1930 and is a story of deceit, love, traditional family roles, and suicide. Jin Xiuying says: "The story is one of a woman who wants to break away from family traditions, aiming to marry for love instead. Her family finds this difficult to accept, resulting in various suicides. Of course, like in any good Chinese story, the spirits of those who commit suicide return and lament their tormentors, eventually finding solace with the ones they truly love."

Xiuying is inspired by this ancient story, understanding the conflict felt by many modern day Chinese young people, and particularly those who have moved to Western cultures, such as that of the United States. While her parents are broadly liberal, they still have regular battles when Xiuying is "too Americanized" for their beliefs. Xiuying explains: "My parents are truly old school. I love them dearly, and they have taught me so much about the traditional ways of life, much of which is very positive. But at the same time, I am a 21st century, modern woman. This internal conflict is something that I try to write about in my music."

Through her songwriting, Xiuying has gained the attention of a number of big names in the music industry. They find her sounds unique, and her lyrics captivating. They speak to a wider audience. One music producer reports: "It is clear that Xiuying sings about her own inner conflicts, but what young person doesn't have those to some degree? All young people rebel against their parents, and hearing lyrics that describe how that is normal, and how to get through it while continuing to have strong bonds with the family, really speaks to people. I see an exciting future for Xiuying and look forward to work with her."

What Xiuying has also aimed to do is to incorporate Shidaiqu in her music. Shidaiqu is a mixture of Chinese folk music and European Jazz. It saw its origins in Shanghai in the early 1920s, and Xiuying's parents grew up with it. The term "shidaiqu" translates as "songs of the era", which instantly describes that the style never stands still. It always aims to be relevant to the era in which it is played, and this is a philosophy Xiuying incorporates in her own music as well.

She explains: "Shidaiqu is such an important style of music. It has been the inspiration for the Shanghai Lounge Divas project of DJ Ian Widgery, and for The Edge of Heaven album of Gary Lucas. Naturally, a lot of people within China continue to create Shidaiqu music, as it is a form of fusion music that will always be relevant. However, Taiwanese pop, Mandopop, and Cantopop are becoming increasingly popular, and this has led to a decline in the number of people who still listen to shidaiqu."

She points out: "I want to change this. I wouldn't class my music as traditionally shidaiqu, but it wouldn't be by definition, since shidaiqu changes and fuses. In my cases, I have fused it with western music. I'm as inspired by my namesake opera singer as what I am by Hank Williams and Beyonce. My shidaiqu fuses all of that music. There are bits of jazz, R&B, punk, and many other styles, and this is found as much in the tunes as it is in the lyrics."

Xiuying is taking the world by storm, and some have even suggested that she is the real life Coyote Ugly story - young, beautiful, unique, and full of life.