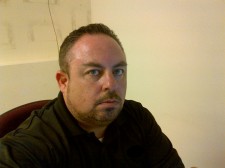 EastVale, CA, April 12, 2017 (Newswire.com) - The Hilton Hotel has recently opened its newest hotel. The luxury resort is found in Jordan's Sweimeh. Uniquely, it the lowest hotel in the world, at 1,345 feet below sea level. Jeffery David Whippo, who is very familiar with Israel as a whole, but particularly Jerusalem and the Dead Sea, decided to pay it a visit.

Jeffery Whippo says: "I went to the top of Masada to view the Dead Sea, as I do every time I'm there, and that's when I spotted it. Hiking up the 'snake trail' to the top of Masada, immersing myself in the history of Herod the Great and his palaces, I suddenly saw something that had no place there. Of course, I would never have spotted it were it not for the fact that I was so high up and had such an amazing view."

"From Solomon's stables, I made my way to the Garden of Gethsemane,"

Whippo continues: "For once, I was less interested in the history of Masada, and particularly the mass suicide of 960 Sicarii rebels and their families during the first Jewish-Roman War. I wanted to know what that building in the distance was!"

After descending Masada, Jeffery David Whippo took a dip in the Dead Sea, which continues to be one of the most unique experiences in the world. It was there that he found out, from a local tour guide, that the building he had seen was in fact the new Hilton Hotel. He adds: "I still thought it was a mirage! Luckily, I remembered not to touch my eyes - you will know what I mean if you've ever gotten wet in the Dead Sea. But a local guide solved the mystery for me."

Before deciding whether or not he could squeeze in a visit to the new Hilton in Jordan, as there are some significant visa restrictions in place, Jeffery David Whippo decided to visit Jerusalem instead. The old city of Jerusalem is also home to the Waldorf Astoria, which is also a Hilton. Many find that this particular hotel looks almost out of place, and has very little reference to the ancient history of Herod's Temple, or the Dome of the Rock. Yet, it is one of the world's most luxurious hotels and its business is excellent. It is very different, however, from the new hotel in Jordan.

Whippo states: "Unfortunately, it was not possible to visit the new Hilton hotel, and I didn't have the funds to stay in the Waldorf Astoria! Instead, therefore, I immersed myself in the beautiful and fascinating history of Jerusalem. My personal favorite was the visit to Solomon's stables."

Solomon's stables are now a Muslim prayer wall. However, in 1099, it was converted into stables by the Crusaders. Today, the rings for tethering the horses are still found in some of the pillars. It is also believed that it is the site for Solomon's original temple, which crumbled into ruins. Under Baldwin II, King of Jerusalem between 1118 and 1131 CE, however, the Crusaders took over the underground vaulted space, for functional use for the cavalry.

"From Solomon's stables, I made my way to the Garden of Gethsemane," adds Jeffery. "This really took my breath away. To walk where Jesus prayed, where his disciples slept before he was crucified, and where Judas found Christ and betrayed him with a kiss, is something indescribable. It is an experience that I think everybody should have."